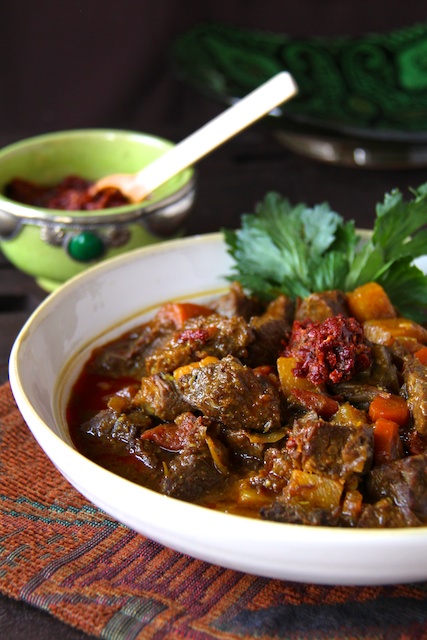 My mother, Ann Ramczyk, was an award-winning cook. Besides winning numerous local and state cooking competitions, she represented Wisconsin twice at the Pillsbury Bake-Off and twice at national beef and chicken cook-offs.

This Moroccan Beef Stew was the first-place winner in the 1988 Wisconsin beef cook-off and is perfect for a chilly winter night.

I’ve made some adjustments to her recipe over time, but some things Mom just knew best — like using a chuck roast for the stew meat and hand-trimming it. To this day, I don’t purchase anything labeled “beef stew meat.” This is often bits and pieces of a variety of cuts that can result in different meat textures within the stew.

When I recently made this dish, I bought a 2¼-pound chuck roast. After trimming and cubing it, I had 1½ pounds of meat that I was confident would yield a consistent texture throughout.

Mom used canned pineapple for her winning dish, but because it’s so easy these days to grab fresh-cut pineapple at any grocery store, I prefer to use that over canned. She was also a thrifty cook. Instead of draining the juice from the canned pineapple and discarding it, she saved it, added water to it and used it for the braising liquid. I use beef broth instead for richer flavor.

When using fresh pineapple with a protein, keep in mind it contains an enzyme called bromelain, which is used as a tenderizer. If left on a protein for any significant amount of time before cooking, the protein will turn mushy. Cooking neutralizes the enzyme, so if you want to make this stew a day ahead of time, there won’t be an adverse reaction on the meat.

An added bonus with electric pressure cookers is they are often 3-in-1 devices that also include a rice cooker and slow cooker. Just lock the lid, set the pressure and timer and you can move on to another task. When the stew is done, release the pressure on any pressure cooker as gradually as possible. If done too quickly, the meat can toughen up.

Electric pressure cookers don’t go all the way to 15 psi (pounds per square inch) of pressure. If using a stovetop pressure cooker, you will need to adjust the cooking time because they can go that high. To make the stew another old-fashioned way, you can also do it in a 325-degree oven for about the same amount of time as on the stovetop.

My final touch is to add the harissa, a spicy condiment common in North African cuisine. Garnish with celery leaves (another frugal tip from Mom) and serve with couscous or rice.

Combine flour, salt and pepper on a plate and dredge beef pieces.

Heat olive oil over medium-high heat in a Dutch oven and brown beef evenly in batches. Pour off excess drippings.

Bring to a boil, reduce heat to low, cover and cook 1 to 1 1/4 hours. Alternately, combine the ingredients in an electric pressure cooker and cook on high for 22 minutes.

Add the pineapple and tomatoes and cook an additional 15 minutes on the stovetop or 1 more minute on high in the pressure cooker.

Garnish with celery sprigs and serve with harissa.

Place peppers in a small saucepan with enough water to cover. Bring to a boil. Turn off heat and let stand 20 minutes.

Remove stems and seeds and transfer to a food processor or blender.

Combine cumin and coriander in a dry, nonstick skillet and toast briefly until fragrant, about 30 seconds. Add to the peppers along with garlic, olive oil and red wine vinegar. Blend to a smooth paste. Season to taste with salt.